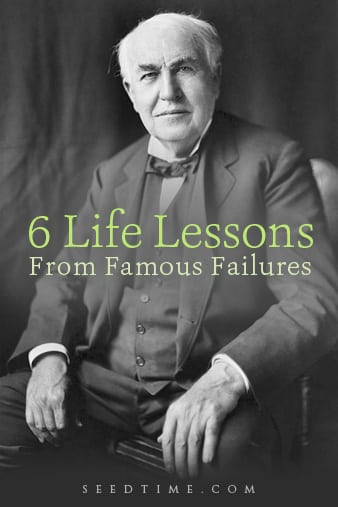 Have you ever met a successful person who did not encounter some failures along the way?

I know I haven’t … it seems that failure is inextricably blended into the pathway toward success.

Fortunately for us, some very famous people have traveled this path.

What can we learn from these “famous failures”?

1. Never give up.  (Winston Churchill)

Churchill failed sixth grade and was defeated in every election for public office until he became Prime Minister of England at the age of 62.  When he met with his Cabinet on May 13, 1940, as England was about to enter the war against Germany, he told them that, “I have nothing to offer but blood, toil, tears, and sweat.”

How about you?  When you are pursuing something noble, honorable and right, do you tend to give up or do you, like Churchill, doggedly stick with it?

2. Learn from your failures.  (Thomas Edison)

Thomas Edison’s teachers said he was “too stupid to learn anything.”  He was fired from his first two jobs for being “non-productive.”  He made thousands of unsuccessful attempts at inventing the light bulb, but when a young reporter asked him how it felt to have failed all those times, Edison’s now famous reply was, “I didn’t fail 5,000 times.  I discovered 5,000 ways that didn’t work.”

How about you?  When things don’t go as you hoped for, do you get paralyzed by self-pity or do you take a step back and ask yourself, “What can I learn from this experience?”

Albert Einstein did not speak until he was 4 years old and did not read until he was 7.  One of his teachers described him as “mentally slow, unsociable, and adrift forever in his foolish dreams.”  Einstein had speech difficulties as a child and was once thought to be mentally handicapped.

He was expelled from school and failed admittance into Zurich Polytechnic School.  However, he buckled down, received some training and was eventually accepted into Zurich Polytechnic.  A few years later, after earning his Ph.D., he received a Nobel prize in Physics and has generally been recognized as the genius of our modern era.

Because of his early failures, Einstein could have given up. Obviously, he wasn’t meant to be a writer or speaker, but he WAS meant to be a physicist of the highest order.  The key?  Discovering his niche.

How about you?  Do you think of yourself as a failure in life because you failed in one area of life?  Maybe those failures are a message you should heed:  try something else, and keep trying until you discover your niche.

Although Beethoven handled the violin awkwardly, and his music instructor told him that he was “hopeless as a composer”, he continued to play his own compositions instead of working on his technique.  The rest, of course, is history and even legend: Beethoven wrote five of his greatest symphonies while completely deaf.

We are thankful today that Beethoven insisted on playing his own compositions, but, if he hadn’t “trusted his gut”, he may have given up his pursuits of composing.  He just KNEW that he was meant to be a composer.

How about you?  Are you doing what you know you should be doing?  Do you continue doing it even if critics and friends tell you to give up?  Do you trust your gut?

5. Use criticism as your motivator. (Sidney Poitier)

After his first audition, the casting director told Sidney Poitier, “Why don’t you stop wasting people’s time and go out and become a dishwasher or something?”  Poitier recalls that he decided at that very moment to devote his life to acting.

How about you?  Does the sting of criticism make you want to quit or do you allow it to motivate you?

6. Allow failures to give you focus.  (JK Rowling)

Before Harry Potter fame, JK Rowling was a divorced mother living on welfare.  She refers to herself as “the biggest failure I knew”, but credits much of her success to her failure.  She explained in a Harvard commencement speech, “Failure meant a stripping away of the inessential. I stopped pretending to myself that I was anything other than what I was, and began to direct all my energy to finishing the only work that mattered to me. Had I really succeeded at anything else, I might never have found the determination to succeed in the one area where I truly belonged. I was set free, because my greatest fear had been realized, and I was still alive, and I still had a daughter whom I adored, and I had an old typewriter and a big idea. And so rock bottom became a solid foundation on which I rebuilt my life.”

Do your failures give you an intense focus on the things that really matter to you?  If not, why not?

Hopefully, these stories will help us realize that failure is not final, but merely preparation for the next step in our journey.

“The godly may trip seven times, but they will get up again.
But one disaster is enough to overthrow the wicked.”