To many in America, personal finance from a Christian perspective begins and ends with Dave Ramsey. If you listen to Ramsey long enough, though, you will hear him give a tip of the cap to another man, Larry Burkett. Burkett died in 2003, but his legacy as a leader in the world of Christian personal finance was secure well before his passing.

Who Was Larry Burkett?

Burkett taught many of the same principles that today are heard over the airwaves from Ramsey such as getting out of debt, having an emergency fund, and giving generously. His message was quite simple, but it resonated with millions who read his books and heard his three different radio programs (“Money Matters,” “How to Manage Your Money,” and “MoneyWatch.”). In addition, many others remember his short radio blasts called “A Money Minute,” which focused on personal finance, but covered many related topics as well.

Burkett is probably best remembered for his books, and he was a prolific author. Many do not realize (in fact, I didn’t know this until I researched for this article) that Burkett wrote novels in addition to his financial and leadership writing. All told, Larry Burkett authored or co-authored some 70 volumes, which, according to different sources, have sold around 11-12 million copies worldwide.

To house all of this work, Burkett founded a ministry called Christian Financial Concepts (CFC) in 1976. In 2000, that ministry merged with the well-known Crown Minstries, and the joint work became known as Crown Financial Ministries. Burkett was the CEO until his passing, and the work that Crown does continues to this day, following the same basic concepts Burkett used throughout his life. 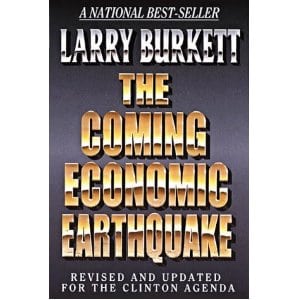 While several of Burkett’s works are noteworthy, two books stand out to this author. The first was his 1991 work, The Coming Economic Earthquake. In that volume, Burkett looked at the national debt problem, and the overall economic picture of America. At its most basic level, he was arguing against a nation piling up debt without any real plan to pay it back. He believed that, if the tide was not turned soon, the “earthquake” would occur very early in the 2000s. Burkett, never one to shy away from questioning the government, asked whether or not those in elected positions of power would do anything to stem the tide, and then gave his opinion that they would not.

The other book that stands out to me is one that is along the same line of thinking: Whatever Happened to the American Dream, published in 1993. In this volume, Burkett turned most of the attention away from Washington and toward Main Street. The book was a clear call against laziness and the pursuit of easy money, and a reminder to many Americans that “the good life” does not come without some level of hard work and sacrifice. A firm believer in education (he was a campus minister before founding CFC), Burkett also used this volume to call to Americans to remember the importance of both an education and the ethics that must accompany an honest days’ work.

But Burkett did not just write about “macro-problems,” he dealt often in his works with each individual family and what they needed to do to live by God’s principles for handling money. Books such as Debt-Free Living, Your Finances in Changing Times, and the children’s book What if I Owned Everything continue to be bought and read. They continue to help families gain the proper perspective–the Biblical perspective–for handling money.

Burkett’s legacy is seen in sites like the one you are reading. For many years, Christians only talked about money when it came to the subject of giving. Rarely were topics such as investing, spending, or leaving a financial legacy ever discussed in Christian circles. However, the Bible speaks to each of these issues and many other money-related issues, as well. Leaders like Burkett opened many eyes to see that God cares about how we deal with our money in every way, from earning it honestly, to handling it wisely. His work lives on, both in the foundation that is named for him, and in other writers, speakers, bloggers, and personalities who have taken that same message to a vast audience.

If you wish to read more about Larry Burkett, here are some additional resources. Each of these was used in preparation for this short article.

What do you think about Larry Burkett? Leave a note in the comments section below!