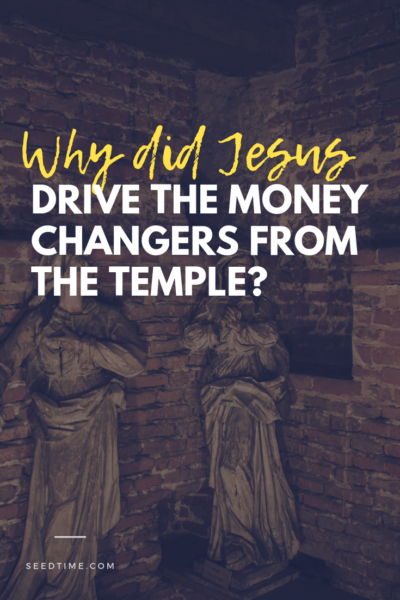 Jesus not only drove money changers from the temple, but he also cleared out those who were selling animals.

When it was almost time for the Jewish Passover, Jesus went up to Jerusalem. In the temple courts he found people selling cattle, sheep and doves, and others sitting at tables exchanging money.

So he made a whip out of cords, and drove all from the temple courts, both sheep and cattle; he scattered the coins of the money changers and overturned their tables. – John 2:13-15 NIV

Jesus entered the temple courts and drove out all who were buying and selling there.

He overturned the tables of the money changers and the benches of those selling doves. “It is written,” he said to them, “‘My house will be called a house of prayer,’ but you are making it ‘a den of robbers.’” – Matthew 21:12-13 NIV

Why Did Jesus Drive Them Out?

1. They were taking advantage of those who had traveled long distances to celebrate Passover.

Two things were essential for these foreign worshipers: an animal to sacrifice and Temple coins which local merchants would accept. There was probably nothing wrong with selling animals or operating a legitimate money exchange, but, according to Jesus, these particular vendors were a “den of robbers” who undoubtedly charged exorbitant rates, thus taking advantage of those who seemingly had no other options.

2. They were doing so in the Temple.

Evidently, these shysters set up shop in the Court of the Gentiles, effectively crowding out those who had traveled to worship. Furthermore, they were perverting the purpose of the Temple itself; Jesus exclaimed that they were turning the house of prayer into a den of robbers. Not good!

In summary, these “businessmen” were guilty of a double whammy: they took advantage of others and they blocked God’s purposes in doing so. No wonder Jesus was angry!

What Should We Learn?

Of course we won’t literally be selling sacrificial animals or providing a money exchange for worshipers, but we can take advantage of others. Do you ever use others to in order to advance your own purposes? Have you ever borrowed money from a generous friend when you have no intention of repayment? At work, do you push the less savory tasks onto your subordinate simply because you have the power to do so? Do you ask favors of people who don’t know how to say no?

2. Speak up when others do the same thing.

The flip side of taking advantage of others is speaking up when you see someone else doing it. Jesus spoke up in no uncertain terms . . . perhaps we should do the same?

Anger is often portrayed as a negative emotion, but the God who gave us our emotions expects us to be occasionally moved to anger. Jesus was angry because men were perverting the use of his Father’s house. How about you? Does child abuse make you angry? What emotions are fired off when you hear about human trafficking? If anger is nowhere on your radar, you might need to ask yourself why it isn’t! That anger can be a great catalyst to getting us involved in causes we would otherwise ignore.

I realize that we need to be wise about what activities take place in church buildings, but the bigger point is that today’s believers in Christ are the church. Therefore, as we mingle in the world around us, we are showcasing the church. If the Temple was made for prayer, do we think we, the children of God, have any less of a calling? Is it possible that we are guilty of perverting the use of “God’s house” when we compromise our prayer walk?

The Rest of the Story

What happened after Jesus threw those moneychangers from the Temple? I imagine there was a shocked silence as people awkwardly waited to see what would happen next. The Bible tells us that the blind and the lame came to him, and children recognized him as “Hosanna, son of David.”

Think about it: Immediately after Jesus dealt with the opportunists, he became a magnet for the very ones whom others so often take advantage of. It may be that when we take a courageous stand for righteousness, some will recognize and appreciate that stand. The world is full of downtrodden people who are looking for someone to stand up for them. If we don’t do it, who will?

What additional applications can you make from Jesus throwing the moneychangers from the Temple? Your thoughts are always welcome!

What a great lesson! Learn even more about what the Bible says about Money!