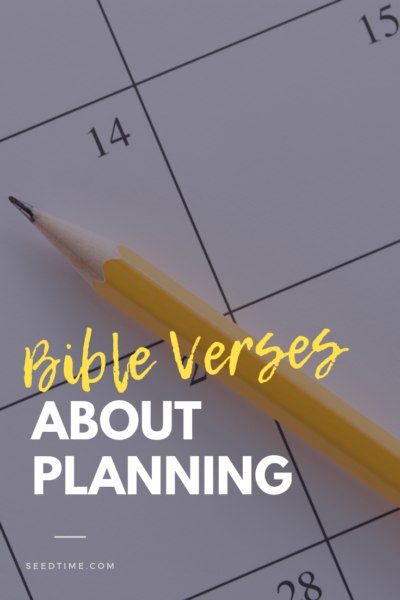 We all know that it’s best to have a plan, when it comes to almost everything. The Bible doesn’t leave out this tool. We need to plan. I’ve studied scripture to find Bible Verses about Planning. Let’s see what the Bible says!

Genesis 41:34-36
Let Pharaoh take action to appoint overseers in charge of the land, and let him exact a fifth of the produce of the land of Egypt in the seven years of abundance. “Then let them gather all the food of these good years that are coming, and store up the grain for food in the cities under Pharaoh’s authority, and let them guard it. “Let the food become as a reserve for the land for the seven years of famine which will occur in the land of Egypt, so that the land will not perish during the famine.

Proverbs 6:6-8
Go to the ant, o sluggard, observe her ways and be wise, which, having no chief, officer or ruler, prepares her food in the summer and gathers her provision in the harvest.

Proverbs 13:16
A wise man thinks ahead; a fool doesn’t, and even brags about it!

Proverbs 13:19
Desire realized is sweet to the soul, but it is an abomination to fools to turn away from evil.

Proverbs 15:22
Without consultation, plans are frustrated, but with many counselors they succeed.

Proverbs 16:1
The plans of the heart belong to man, but the answer of the tongue is from the Lord.

Proverb 16:9
A man’s heart deviseth his way: but, the Lord directeth his steps.

Proverbs 21:5
The plans of the diligent lead surely to advantage, but everyone who is hasty comes surely to poverty.

Proverbs 22:3
The prudent sees the evil and hides himself, but the naive go on, and are punished for it.

Proverbs 24:3-4
By wisdom a house is built, and by understanding it is established; and by knowledge the rooms are filled with all precious and pleasant riches.

Proverbs 24:27
Prepare your work outside and make it ready for yourself in the field; afterwards, then, build your house.

Proverbs 27:12
A prudent man sees evil and hides himself, the naive proceed and pay the penalty.

Proverbs 27:23
Know well the condition of your flocks, and pay attention to your herds;

Ecclesiastes 11:2
Divide your portion to seven, or even to eight, for you do not know what misfortune may occur on the earth.

Matthew 25:1-13
“Then the kingdom of heaven will be comparable to ten virgins, who took their lamps and went out to meet the bridegroom. Five of them were foolish, and five were prudent. For when the foolish took their lamps, they took no oil with them, but the prudent took oil in flasks along with their lamps. Now while the bridegroom was delaying, they all got drowsy and began to sleep. But at midnight there was a shout, ‘Behold, the bridegroom! Come out to meet him.’ Then all those virgins rose and trimmed their lamps. The foolish said to the prudent, ‘Give us some of your oil, for our lamps are going out.’ But the prudent answered, ‘No, there will not be enough for us and you too; go instead to the dealers and buy some for yourselves.’ And while they were going away to make the purchase, the bridegroom came, and those who were ready went in with him to the wedding feast; and the door was shut. Later the other virgins also came, saying, ‘Lord, lord, open up for us.’ But he answered, ‘Truly I say to you, I do not know you.’ Be on the alert then, for you do not know the day nor the hour.”

Luke 12:16-21
And He told them a parable, saying, “The land of a rich man was very productive. And he began reasoning to himself, saying, ‘What shall I do, since I have no place to store my crops?’ Then he said, ‘This is what I will do: I will tear down my barns and build larger ones, and there I will store all my grain and my goods. And I will say to my soul, “Soul, you have many goods laid up for many years to come; take your ease, eat, drink and be merry.”‘ But God said to him, ‘You fool! This very night your soul is required of you; and now who will own what you have prepared?’ So is the man who stores up treasure for himself, and is not rich toward God.”

Luke 14:28-30
For which one of you, when he wants to build a tower, does not first sit down and calculate the cost to see if he has enough to complete it? “Otherwise, when he has laid a foundation and is not able to finish, all who observe it begin to ridicule him, saying, ‘This man began to build and was not able to finish. ‘”

1 Corinthians 16:1-2
Now concerning the collection for the saints, as I directed the churches of Galatia, so do you also. On the first day of every week each one of you is to put aside and save, as he may prosper, so that no collections be made when I come.

1 Timothy 6:7
For we have brought nothing into the world, so we cannot take anything out of it either.