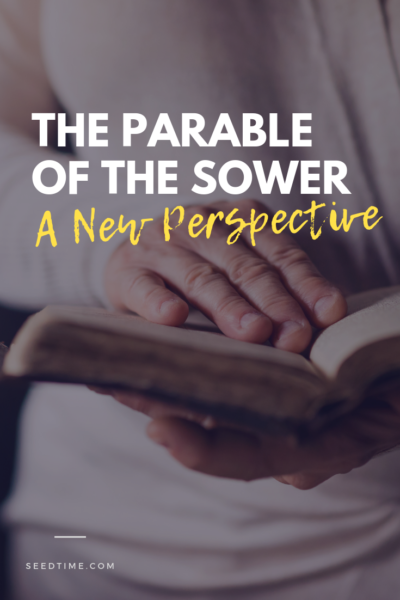 It’s fascinating to read the parables of Jesus because there always seems to be something new that comes from it. That’s how I feel about the parable of the sower.

Take a few minutes to read one or more of the accounts:

The parable is simple: the sower (Christ) scatters his seed generously and it ends up on four different types of terrain.

Some land on the side of the road, some on rocks, others in thorny soil, and some in good soil. The first three groups of seed die and the seed planted in the good soil flourishes.

And we immediately say, “I want to be the good soil.” Or we say, “I know some people who are like the rocky soil,” and, “Let’s pray for the folks who are stuck in the thorny soil.”

So why is it called the parable of the sower, when all we do is talk about the soil?

Think About the Sower

Jesus shares that the sower scattered seed (the Word of God) on all types of ground. It didn’t say that he was meticulously planting the seeds in designated ‘good soil’ areas – it says he was scattering the seed everywhere.

Doesn’t that seem wasteful though? I mean, if I were planting a field, why would I throw seed on rocks, thorns, and the side of the road? Wouldn’t you want to be careful and put the seed in the good soil from the beginning?

But remember what Jesus said earlier:

Christ makes it clear that he came to rescue sinners. His purpose was to bring salvation to everyone.

The meaning of the parable of the sower is twofold:

We can’t ignore the soil types completely, but it was important that we first recognize the message of the generous sower.

Jesus knew that most of the people in the crowd would say, “Wow, great story,” and move along with their lives. When he ended the parable with, ‘he who has ears to hear, let him hear,’ Jesus was challenging them to think about the meaning of the parable.

The best part about Jesus’ examples of the soil types is that a lot of us will experience a few of them in our own lives.

‘Some fell along the path’

This is the ‘in one ear, out the other’ crowd. Picture a middle-eastern road hardened by years of travel by men and animals. What happens to the seed when it falls here? It sits out in the open for the birds to come and get it. If we don’t take God’s Word seriously, that’s the soil we’re representing.

‘Some fell on rock’

These people know the Word of God, but when they’re tested, they collapse. They have no root. They’re not planted deep enough in the soil, so God’s Word hasn’t truly become their foundation.

It’s a superficial faith that springs up when times are good. But when the heat comes, just like the sun on a hot day, the small seedling that shot up on the rock will wither and die for lack of soil and water.

‘Other seed fell among thorns’

They hear the word, but do nothing with it.

They know the word, but don’t truly accept it.

They teach it, but don’t practice it.

If we’re not earnestly seeking the Word of God, it leads to indifference about devotions and relationship with him.

So what happens? The source for satisfaction comes from external things (the thorns): riches, pleasures, and prosperity. Even though the seed was planted in good soil, the thorns choked it, just like these things can choke us from depending on God.

. . . and yielded a crop, a hundred times more than was sown. It may seem like funny math and bad business, but God knew what he was doing when he sent Christ to scatter the seed everywhere.

There’ll be times in your life when you feel like you’re firmly planted in the good soil. Use this opportunity to share God’s Word with others.

But remember, the fruit of sharing the Gospel doesn’t just happen on its own. It takes a humble heart and meditation on the Word of God to produce good fruit and to further the Kingdom of God.

What are your thoughts on the parable of the sower? Leave a comment!

The Bible has so much to say about our money! Here are some Bible verses that has revolutionized my finances!