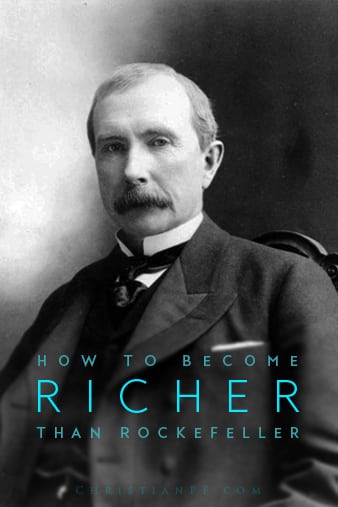 He was the first American billionaire and one of the richest men to ever live.

I am sure many people today wish they could have walked in his shoes.

If, somehow they could, I think some would find it to be eye-opening.

Are you richer than John D. Rockefeller?

As wealthy as he was, Rockefeller might have had anything that money could buy. But what a few hundred dollars may buy today, couldn’t be bought with millions 150 years ago.

Today, we have central heating and air conditioning, cars, planes, Tempur-Pedic mattresses, iPods, and millions of other gadgets. Even Rockefeller in his day couldn’t buy air conditioning. Maybe he had fifteen people fanning him on a hot summer’s day (because he could afford it), but I would rather have air conditioning. He probably had chauffeurs to take him by horse and buggy all around town, but I would much rather be riding in a ten-year-old Chevy. Wouldn’t you?

If we change the way we think of “wealth” and compare our standard of living to Rockefeller’s, we’re doing pretty good. In fact, I would go as far to say the majority of Americans live an all-around more “comfortable” life than Rockefeller did. Who then, is actually richer?

How much do we really need to be happy?

If your household annual income is over $50,000, then you are in the top 1% richest in the world. (See for yourself at the Global Rich List.) And if we can agree that most of us are living a more comfortable life than a billionaire at the turn of the Twentieth Century, then shouldn’t we be happy with what we have?

And maybe we aren’t complaining — maybe we are just using our credit cards instead. Do we really need all the junk we are buying or are we forgetting how good we actually have it?

Why not keep up with the Joneses?

What’s the point with all this? Why spend energy trying to be grateful for the things we have? Why not just try to keep up with the Joneses? Here are a few reasons:

Life is far more enjoyable when you are grateful. Grateful people divert their energy to seeing the good things they’ve been given rather than focusing on what they don’t have. This alone makes them much happier and far more enjoyable to be around.

You can save a lot of money. When you are thankful that you have a car rather than having to ride the bus everyday, it makes it a lot easier to break the habit of buying a new car every year. This can apply to anything — HDTV is great, but so is color TV. Remember when that was the new break-through technology?

Forgetting about the Joneses can set you free. Doing things to impress and appease other people is a dangerous trap. So many people voluntarily become “puppets” to those they are trying to impress — trading control of their lives for temporary social approval. Having been enslaved by it for years, I suggest forgetting about what the Joneses think. They’re overrated anyway.

You can actually enjoy the things you have. Everything loses a bit of its appeal as we get used to it. From a new pair of shoes, a new car, a spouse, or anything else — they are all really exciting while we are anticipating them. But, once we have them for a while, they just aren’t as exciting as they once were. By truly appreciating it and focusing on the benefits of it rather than the “greener grass” elsewhere we can truly enjoy what we have.

I don’t say all this to suggest that we all should live like we are hovering around the poverty line. I merely want to suggest that maybe, just maybe, we have it a little bit better than we think. Regardless of whether you have 60″ HDTV and a new BMW or a 19″ Sanyo and a 10 year old Chevy — be grateful. Either way, Rockefeller would be jealous.

But godliness actually is a means of great gain when accompanied with contentment. -1Tim6.6

“As long as the earth endures, seedtime and harvest, cold and heat, summer and winter, day and night will never cease.”