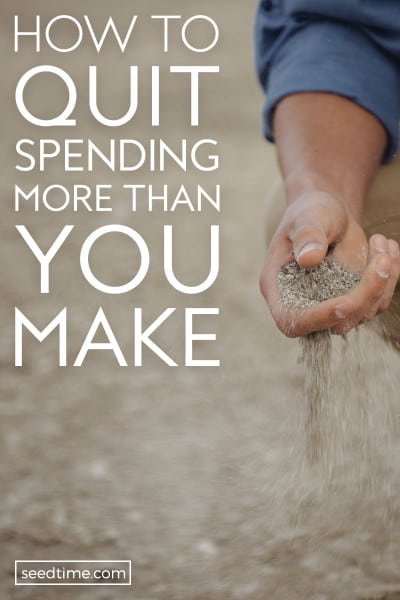 So, you spend more than you make – you are not alone.

This is a tough one. Spending more money than you earn is common practice in the U.S., and increasingly in other countries around the world.

Credit card companies have simplified the process so much that it requires quite a bit of discipline to live only on the money you make. This is a difficult task, but it is the first step (and most crucial) for most people to financial freedom.

Just like there is more than one way to “skin a cat” or to quit smoking, there are multiple ways to spend what (or less than) you earn. Listed below are the steps that I took to make it happen for me.

1. Believe that you can.

This is so important, because it is this belief that is going to carry you when you feel like quitting. Find people who have gone from overspending to living within their means and get encouraged by their stories. I am not sure what made me decide that I needed to change, but I had read enough stories of people changing their financial picture that I truly believed that I COULD DO IT.

If you do not yet believe that it is possible, keep reading and listening to success stories until you believe that you can do it. When you get discouraged and feel like quitting, go over the stories again and encourage yourself. The motivation gained from other people’s successes are going to be one of your main keys to succeeding, because if you do not BELIEVE that you can do it, you are NOT going to make it.

2. Eliminate the temptation to spend.

I don’t really have an opinion about cutting up credit cards, because to me it is kind of like throwing away a smoker’s pack of cigarettes. It is pretty easy to go buy another pack of cigarettes and it is almost just as easy to get another credit card. Obviously, the key here is to have a burning desire to want to curb your spending. It is not a bad idea at all to cut up the credit cards. I think I did cut up my credit card (luckily, I was too foolish to know that you could have more than one credit card at a time).

Romans 13:14 says to”make no provision for the flesh in regard to its lusts.”

I did this by not going to the mall and not going out to eat. These were my two big areas where I spent/wasted the most money. Especially with the case of the mall, I could eliminate most of my temptation just by not being there.

Learning to say NO to ourselves is one of the most beneficial habits we can develop. I call it a habit because it truly is. People who never tell themselves NO have a difficult time doing it. On the other hand, people who regularly tell themselves NO find that although it may not be easy, it becomes less difficult the more you do it.

Your success is based on your ability to say NO

The list goes on and on, but the point remains the same: Get good at saying NO.

“Do something you hate every day, just for the practice.” –John Maxwell

The point John was making in this quote was that in order to succeed, you have to do things you do not want to do. People who achieve their dreams have to pass up a whole lot to reach their destination.

As I think about areas of my life where I have been able to implement this in small steps, the corresponding rewards have been great. My walk with God, my finances and my relationships have all seen great progress as a result of saying NO in seemingly insignificant moments.

By following these simple yet difficult steps, I went from spending about 125% of what I made to 85%. If you are over 100%, make that your first goal: not getting into anymore debt, then your next goal should be to snowball your debt and move to well below 100%.