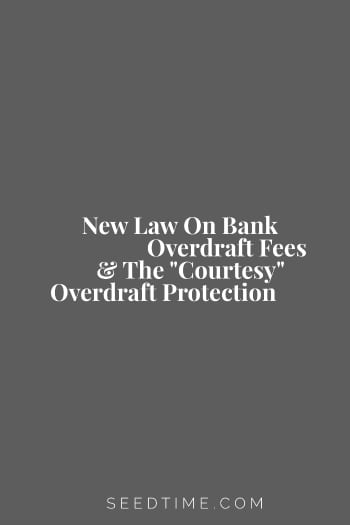 A few years back, I used to work in a small bank and I remember a customer who owned a lawn-care company who seemed to be in there everyday.

He was bad with a checkbook at best. He bounced checks left and right and I still remember my boss bragging about how much money he had made off that guy.

Over a thousand dollars in a year – all in overdraft fees. Something just didn’t seem right.

Clearly the customer needed to get a little bit more organized with his finances, but it seemed like the bank should have taken a different approach…

Recently Consumer Reports released an article discussing the new Federal law pertaining to banks and their overdraft services. Not sure if the motivation for the new regulation was customers like the one above, but I think it is probably a good thing.

Believe it or not, that $35 fee that the bank charges you when you overdraw your account is actually a “service” that your bank is offering you. They care so much about your well being that they want you to be able to buy that Snickers bar without being told that you don’t have the money in your account. 😉  And then they charge you $35 when you spend 50 cents more than you have in your account.

Starting this summer (July 1st for new cards and August 15th for existing accounts) customers will have to opt-in to get overdraft protection on their account. So rather than getting charged $35 for that Snickers bar, your card will be declined. Some people will still prefer not to have their card declined, but you can bet that people are going to save a lot of money (and banks will lose a lot of money) without the automatic opt-in that many banks currently have.

How to cut your Overdraft fees now

If you don’t want to wait around until the Federal regulations kick in, you can try to see if your bank will allow you to opt out now. Some will allow it.

But even if they don’t check to see if they have an overdraft program that pulls from a savings account instead. For my offline checking account, our checking is linked to our savings. So if we do go over, it automatically moves money from our savings. It isn’t free – they charge $2 each time, but that sure beats the $35 overdraft fee.

An even better way to minimize Debit-Card Overdraft fees

We use ING Direct as our primary checking and savings account (and budgeting system) and one of the reasons I love ING so much is that they don’t have overdraft fees on their checking account. You can go below zero and they charge you interest (just like a temporary loan) on any balance below $0. So if we happen to go below zero for a day or two and then transfer the money over it costs us about 20 cents – as opposed to $2 or even $35. Not a bad deal at all…

Finding A Bank Without Overdraft Fees

Bank of America is very sneaky with overdraft fee charges. For example, recently my account was low on funds, but I knew how much I had in my account that day since I had just checked it online. Then I went to work that day and used my debit card for a few different transactions. The next day I logged on to my B of A online site and found five negative transactions. I’m not sure if I was more shocked or confused. What happened to the money in my account the day before?

Apparently, Bank of America had cleared a check I had written a week before but their system never bothered to display this as a debit / withdrawal from my account. So now I owe multiple $35 NSF fees for small charges for things like a $2 cup of coffee and my $3.75 fast food lunch is now as expensive as a high priced steak dinner. I also bought a pack of gum and now each time I take one of the ten pieces I feel like I’m chewing on $3.50 for each stick. I know it’s my own fault for not keeping track of my account, but I’ve become so dependent on the convenience of my online account that I feel like these fees are unfair. This is very deceptive.

The truth is all NSF fees are preventable. People who overdraft their accounts on a regular basis are typically those who are not keeping accurate track of their balance. You don’t want to learn the hard way, like I did, to never fully depend on the online balance.

The large banks tend to charge the highest overdraft fees. Over the past year there has been a lot of talk about consumer protection and banking regulations. With the new overdraft fee laws hopefully things will get better. But you never know how else they might charge you.

Bank of America is one of the most popular banks around, but has one of the highest overdraft fees. They charge $35 per transaction and will take up to 10 overdrafts per day. On top of that they charge another $35 if your account has been in overdraft for 5 consecutive business days. So if you make a mistake like me and buy a cup of coffee, then a burger later, and a pack of gum at the mini mart, then you could be in the hole $105, three transactions $35 each. This can add up quick if you’re out and continue to use your check card. Recently they have changed their policy to only charge $10 overdraft fee for each transactions that is under $5 overdrawn, but only on the first day over.

US Bank has a tiered overdraft fee system. They charge $19 per item on your first occasion, $35 per item on multiple occasions up to four, and above five occasions they charge $37.50 per item. More sophisticated, but not much better for your wallet. On top of that, they charge $8 per day, starting on the 4th calendar day your account is in overdraft.

Wells Fargo has the same overdraft fee structure as Bank of America. They also charge $35 per item, up to 10 per day and charge another fee of $5 per day starting on the 4th day your account is in overdraft.

The big online banks are not much different. FNBO charges $30 with a maximum of six per day and $3 daily overdraft fee. HSBC Direct charges $35, but doesn’t have an extended overdraft fee.

Local banks also have some of the lowest overdraft fees. Most of them don’t have extended overdraft fee and some will only charge you a small onetime fee.

The lowest overdraft fees in our area are usually with the local credit union, they tend to charge the lowest fees. This actually surprised me, since I recall the fees used to be much higher.

Capital One 360 The bank without an overdraft fee

But hands down, Capital One 360 is the best when it comes to overdraft fees. They don’t really have them. They do make money when you go beyond the money in your account, but it works different and saves you a lot of money.

Instead of charging you $35 when you overdraw your account (like every other bank) they just let your account go below $0 and charge you about 11% interest until you bring the balance back above $0. So the end result is that if you get the account back above $0 within a few days, you end up paying about 35 cents instead of $35 dollars!

Obviously if you run a negative balance for months at a time it could get expensive, but if you rectify your negative balance quickly it will cost you next to nothing.  Capital One 360 also offers high interest on many of their accounts including the smallest accounts, so that’s also a bonus.