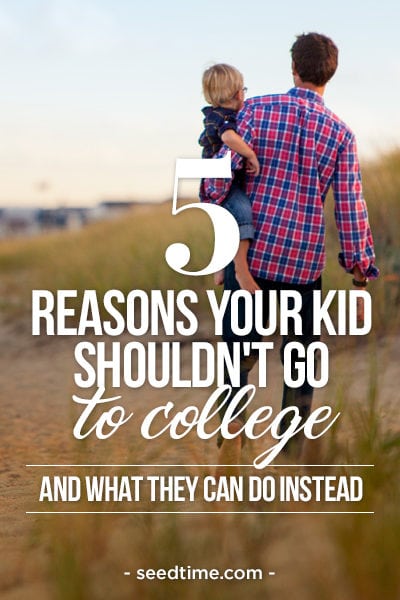 [Note from Bob:  I get WAY too many emails from readers who take out over $100K+ in student loans and upon graduation discover that even low paying jobs can be hard to come by.  Many find themselves deep in debt with very little income – not exactly starting off on the right foot.

I believe there will always be a time and a place for a college degree, but – more now than ever – to assume that a degree will land you a good job is (in many cases) wishful thinking at best.  Therefore, I thought it might be nice to hear Lynnae’s suggestions for alternatives.]

Dates for SAT tests are rolling in. Notices for parent FAFSA information nights come home with your high school kid on a weekly basis.

It seems all the teachers at high school are pushing your child toward college.

Maybe, but maybe not.

A college education is a good thing, under the right set of circumstances. But some kids aren’t cut out for college. At least not right away.

Before pushing your child into college, be sure to consider these 5 reasons your kid shouldn’t go to college.

He wants to pursue a career that doesn’t require a college education.

None of these careers absolutely require a college education. Some will net your child good money without college. The others, like becoming a musician, are fairly low paying jobs. If your child takes out loans to pay for a music degree, will he be able to afford to work in the music field while paying off the loans?

When your child has strong ideas about what he wants to do with his life, make sure he actually needs that college degree before paying for it.

She can’t handle the academics.

Some kids thrive in the classroom. Others do not. If your child struggles in high school to the point of hating school, will she be successful in college?

There’s no point in setting a kid up for failure. I’m all for challenging kids to push their abilities to the limit, but if your child truly can’t handle the academic requirements of college, maybe it’s best to pursue another plan.

Sometimes it can be hard to know whether to push your child toward college or not. As a parent, you know your child’s personality the best. When your child has faced challenges in the past, has she risen to the occasion? Does she struggle because she’s scared or because she could benefit from extra help or tutoring? If so, pushing a child gently to take a couple of college classes could be a good thing.

But if your child struggles because she is not at all academically bent, or because she is rebellious and not interested in trying, it may be best to skip college altogether, at least for now.

Does your child take high school seriously? Every high schooler I know is irresponsible in one way or another, but I’m talking about the kid who doesn’t care about school at all.

If your child skips class, blows off tests, and gets detention on a regular basis, waiting on college might be a good idea.

Why pay $30,000 a year for a kid to skip class? Before ponying up the money, make sure your child will use his time well at college.

She can’t go without taking on a mountain of debt.

If your child can’t afford to go to college without taking on tens of thousands of dollars in debt, she should consider waiting.

I know it seems unfair, but she will be better off in the long run, especially if she doesn’t know exactly what career to pursue.

It’s better to work for a couple of years to save some money for college before taking out loans. I’d rather have my student delay college than live out the rest of her life trying to repay large amounts of student loans.

What to Do Instead of College

Contrary to what many teachers lead you to believe, there are plenty of options for kids who are not college bound right after high school.

Even though jobs that don’t require a college education initially pay less than those that do, getting a job right out of high school is a great choice for some kids.

A job teaches kids responsibility, money management, and work skills. And you never know when a simple menial job will lead to much more.

My non-college educated brother began working at a restaurant bussing tables after high school. He took interest in the kitchen and eventually learned to cook. At this point in his life, he’s worked as a chef in restaurants across the country – without a college education.

College isn’t the only education available after high school. A trade school is also a respectable form of education.

Trade jobs can pay very well, and the learning required is much different than traditional classroom learning.

If your kid isn’t “book smart,” trade school might be just the thing he needs to launch a well-paying career. Don’t count it out.

A lot of education is available at a low cost or free, without going to college.

It won’t get your kid a degree, but it may be what she needs to learn to make a good living.

Especially if your kid is entrepreneurial minded, she may be able to learn what she needs by doing the research online and taking some community based business courses.

I have a college degree, but I learned everything I needed to know about blogging and freelance writing through experience, online courses, and connections I made with people who were doing what I wanted to do.

Independent learning is an especially viable option if your child is a self-starter and highly motivated to learn.

Enroll in a Gap Year Program

Some kids just don’t know what they want to do with their lives. And at eighteen years old, that’s normal.

But if you don’t want to pay thousands of dollars while your kid figures out what to do with his life, explore gap year programs.

They’re typically less expensive than a year at a traditional college, and your kid will learn important life skills.

After a year at one of these programs, maybe your kid will be ready for college. Or maybe he’ll decide college is not for him.

At least he’ll know for sure before going into debt for an education he may not use.

I want to leave you with a word of encouragement.

If your child does not seem to be cut out for college, don’t panic.

The brother I talked about earlier? He faced some pretty big challenges in high school. He barely graduated. There was no question that he was not college bound.

However, he found his niche in cooking and has cooked at some pretty impressive restaurants during the New England tourist season. In the off-season, he has taken his earnings and traveled the world.

He has definitely bucked the system and taken the road less traveled, but it has not impacted his success in life.

Your child can do the same. Take a look at options other than college and try one out. You never know where it may lead.