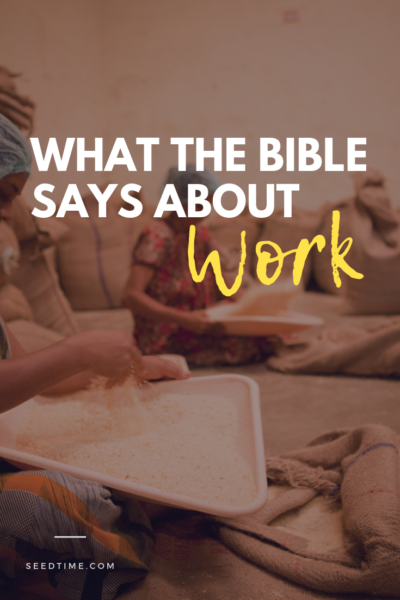 Do you know the subject of work is found pretty frequently in the Bible? I wanted to know what the Bible has to say when it comes to work. There are a variety of examples from working together, needing to work, why you should work and more. In my study of scripture, I found several Bible verses to share with you in seeing what the Bible says about work.

Genesis 2:15
Then the Lord God took the man and put him into the Garden of Eden to cultivate it and keep it.

Exodus 23:12
Six days you are to do your work, but on the seventh day you shall cease from labor so that your ox and your donkey may rest, and the son of your female slave, as well as your stranger, may refresh themselves.

2 Chronicles 31:21
Every work which he began in the service of the house of God in law and in commandment, seeking his God, he did with all his heart and prospered.

Nehemiah 4:6
So we built the wall and the whole wall was joined together to half its height, for the people had a mind to work.

Psalm 127:2
It is vain for you to rise up early, to retire late, to eat the bread of painful labors; for He gives to His beloved even in his sleep.

Proverbs 10:4
Poor is he who works with a negligent hand, but the hand of the diligent makes rich.

Proverbs 12:14
A man will be satisfied with good by the fruit of his words, and the deeds of a man’s hands will return to him.

Proverbs 12:24
The hand of the diligent will rule, but the slack hand will be put to forced labor.

Proverbs 13:11
Wealth obtained by fraud dwindles, but the one who gathers by labor increases it.

Proverbs 14:23
In all labor there is profit, but mere talk leads only to poverty.

Proverbs 18:9
He also who is slack in his work is brother to him who destroys.

Proverbs 20:4
The sluggard does not plow after the autumn, so he begs during the harvest and has nothing.

Proverbs 21:5
The plans of the diligent lead surely to advantage, but everyone who is hasty comes surely to poverty.

Proverbs 21:25
The desire of the sluggard puts him to death, for his hands refuse to work;

Proverbs 22:29
Do you see a man skilled in his work? He will stand before kings; he will not stand before obscure men.

Proverbs 24:27
Prepare your work outside and make it ready for yourself in the field; Afterwards, then, build your house.

Proverbs 24:30-34
I passed by the field of the sluggard and by the vineyard of the man lacking sense, and behold, it was completely overgrown with thistles; its surface was covered with nettles, and its stone wall was broken down. When I saw, I reflected upon it; I looked, and received instruction. “A little sleep, a little slumber, a little folding of the hands to rest,” Then your poverty will come as a robber and your want like an armed man.

Proverbs 28:19
He who tills his land will have plenty of food, but he who follows empty pursuits will have poverty in plenty.

Ecclesiastes 5:12
The sleep of the working man is pleasant, whether he eats little or much; but the full stomach of the rich man does not allow him to sleep.

Ecclesiastes 9:10
Whatever your hand finds to do, do it with all your might; for there is no activity or planning or knowledge or wisdom in Sheol where you are going.

Ephesians 6:5-8
Slaves, be obedient to those who are your masters according to the flesh, with fear and trembling, in the sincerity of your heart, as to Christ; not by way of eye service, as men-pleasers, but as slaves of Christ, doing the will of God from the heart. With good will render service, as to the Lord, and not to men, knowing that whatever good thing each one does, this he will receive back from the Lord, whether slave or free.

Colossians 3:23
Whatever you do, do your work heartily, as for the Lord rather than for men,

1 Thessalonians 2:9
For you recall, brethren, our labor and hardship, how working night and day so as not to be a burden to any of you, we proclaimed to you the gospel of God.

2 Thessalonians 3:10-11
For even when we were with you, we used to give you this order: if anyone is not willing to work, then he is not to eat, either. For we hear that some among you are leading an undisciplined life, doing no work at all, but acting like busybodies.

1 Timothy 5:8
But if anyone does not provide for his own, and especially for those of his household, he has denied the faith and is worse than an unbeliever.

Hebrews 6:10
For God is not unjust so as to forget your work and the love which you have shown toward His name, in having ministered and in still ministering to the saints.