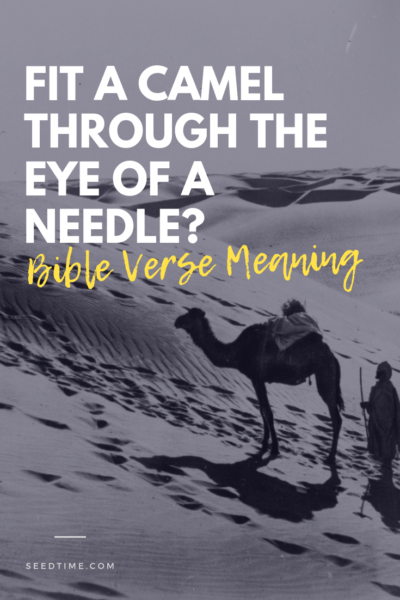 Have you ever tried to squeeze a camel through the eye of a needle?

Ah, you know the verse. It’s the one that people love to quote when they are trying to prove that Christians should be poor because it appears to be more righteous. Well, is it really?

“For it is easier for a camel to go through the eye of a needle than for a rich man to enter the kingdom of God.”

Let’s look at the definition of “rich,” and see who qualifies.

According to Webster’s Dictionary:

Why doesn’t it tell me how much money I need to have to actually be rich?

In fact, I looked the definition up in 7 different dictionaries and not one gives a specific definition of rich. None of them offer a specific annual income to indicate if you are rich or not… Hmmm… so how can we know who is rich and who isn’t? Where is the line drawn?

So, how do you define rich?

Are you wealthier than you realized?

The verse can really strike fear into the hearts of people causing them to run from money. But the truth is that money isn’t the issue. It is a matter of the heart. If we understand that the money isn’t ours, but that it is actually God’s and we are merely stewards of it, then it will be easier to not depend on it. Someone who realizes that he/she is a steward cannot be rich, because they know it isn’t their money.

Won’t I be safe if I never have a lot of money?

Many people have taken this verse to think that by not having much you are safe. By laying back and not really working hard you can rest assured that you will never have much money come into your hands, so therefore you can’t be rich like the verse mentions.

Personally, I think Jesus addressed this in the Parable of the talents. The steward to whom he gave one talent did nothing with it except bury it. The master called him wicked and lazy. To me that rules out the possibility that just being lazy and not earning money will make you righteous.

More thoughts on this passage:

This is a verse that is so frequently taken out of context, especially by people who have never opened a Bible. FMF lays out a great explanation of the verse by providing the whole passage and looking at it in context.

“The amount of money that we have is irrelevant. We are all meant to live abundantly. The problem arises when your love for money supersedes your love for God. Jesus is pointing out that it is easy for a person with lots of money to become attached to the money and therefore makes it hard to give that up for God. i.e. Love for God above all else. Of course this can happen for anyone with any amount of money.”

FMF agreed with him,

“I agree with the commenter above who thinks this is about the person’s attitude. It’s hard for a rich person to enter the kingdom of heaven because he usually has other things on his mind, namely his wealth (protecting it, growing it, enjoying it), and puts it before everything else. As such, serving God and living according to Jesus’ teachings is far, far removed from his thoughts and actions.”

Personally, I think the comments above are right on.

Like mentioned above, I don’t think “rich” can be defined by an actual dollar amount. I have seen people with not much money who would qualify as being “rich” like the young man in that passage, because they are so attached to their possessions. You don’t need much money (or any money for that matter) to make money a higher priority than God.

“No one can serve two masters; for either he will hate the one and love the other, or else he will be loyal to the one and despise the other. You cannot serve God and mammon.”

On the other hand, I have seen people who had a ton of cash, but realized that they were merely stewards of what God had given them and cared very little about material possessions. They were focused on using their wealth to help people and do whatever God required of them. They gladly gave their money, because they were not serving money, but were serving God.

So what do you do?

Stop serving money. The Bible says you cannot serve God and money (Matt 6:24). You have to pick. We will either make decisions based on our walk with God or based on how they will affect us financially. Should you take that job? “Of course, it pays more,” is not the correct response. Our decisions should not be made solely on their impact on our wallets.

Be content. It doesn’t matter whether we have a lot or a little. We are called to be content with what we have. The apostle Paul talked about how he learned how to be content whether he was in a dungeon or living in the king’s palace. He understood contentment.

Don’t be afraid of money. It is the LOVE of money that is the root of all evil. Not money itself. If that were the case, then nothing good could come out of it. But everyday God’s purposes and plans are coming to pass via the use of money.

Give. Giving is a tangible way to break any attachment to money. If you don’t want to give, that is probably a good indication that you need to give.

For more read: Can Rich People Go To Heaven?