245 shares
This famous parable that Jesus used has a lot to teach us about our money if we let it.  Below is the parable and a few of my thoughts about it…

It is interesting to me how upset the master got with the steward who took no risks. The other two stewards did take risks and reaped the rewards. I often wonder why the parable didn’t contain a steward who lost some of the investment. But either way, I think we are led to believe that the primary frustration of the master was that the steward was lazy and didn’t even try. He was called a “wicked and lazy slave.” My take on this is that he was more frustrated with his laziness than his lack of production. The steward didn’t even put the talents in the bank to gain interest. The passage states that the master gave to each of them according to their ability. So, I think we can assume that the steward with one talent did have some ability, or else he wouldn’t have given him any. If he did indeed have some ability to manage money, even with the smallest amount of ability, he would have known that earning small interest at the bank is better than burying it! I liken this to having a Vet watch your dog for the weekend and not feed it. Most everyone knows that you should feed a dog at least daily, but especially a vet. It is their profession – the thing they are skilled at doing and are entrusted to do. So, the extreme amount of laziness this steward had to not at least put the talent in the bank, coupled with the fact that he let fear paralyze him from doing what he was expected to do infuriated the master. The parable is speaking of money, but this can also be applied to the gifts and skills that God has entrusted us with. If I refuse to step out in a gift or skill that God has given me because I am afraid or lazy, I may be behaving the same way as the steward with one talent. 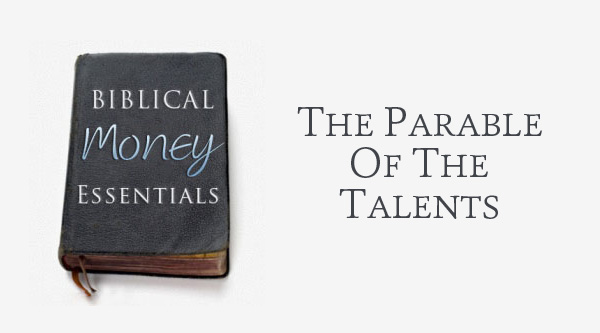 The master in the parable didn’t give each steward the same amount. They all started with different amounts, not much different than this game of life that we are all in. Some people start with a lot, some with a little. But we are all judged based on what we did with what we had, rather than what we ended up with. The great thing about this is that our success is not based on what people may think about us. God knows what He gave us to work with and He will see what we do with it. So, it doesn’t matter whether other people think you are a success or a failure – God’s definition of success is often quite different than man’s. The master gave them each “according to their ability.” He knew a bit about their faithfulness and how likely they were to increase their talents. Turns out he delegated wisely.

One of the first lessons that I learned a few years ago that really changed the way I thought about money was that none of it is mine. It is all God’s. I have the privilege and opportunity to be a steward of what He has given me. Once I began looking at my money this way, it changed my whole financial outlook and helped me to be more focused on pleasing God with the money entrusted to me. Even if we spent our lives and ignored our responsibility as stewards, we still can’t take any of it with us. We might as well try to better the lives of those around us and store up treasure in heaven rather than down here.