There are all kinds of lists that will proclaim this or that book to be the top financial book available.

But we’re going to take a different approach here.

Our list is going to focus on the books that are a benefit to you in five fundamental areas:

If you only read five financial books your entire life, make sure you read these five!

1The Total Money Makeover: A Proven Plan for Financial Fitness “Don’t even consider keeping up with the Joneses – they’re broke!” So writes The Total Money Makeover author, Dave Ramsey. This may be the book for the person who is in debt and wants to get out. There’s no high finance or technical applications here, just common sense get-tough-with-yourself strategies to help you dig yourself out of a financial hole, and get yourself positioned to create a life of financial independence.

Ramsey recommends what he calls “gazelle intensity” as the key to success. You live your financial life the way a gazelle saves itself from an attacking cheetah – “outmaneuver the enemy and run for your life.” He even takes aim at the American Dream, which encourages going into debt.

That means avoiding common practices that can get you into debt in the first place. Ramsey challenges the widespread use of debt consolidation, cash advances, and rent-to-own schemes. Instead he advises readers to pay with cash, and avoid the entire debt trap altogether.

This is not a get-rich-quick book, but rather something of a financial guerrilla warfare strategy for those mired in debt and lacking savings.

His first recommendation is to create a $1,000 emergency fund. Once that’s accomplished, he recommends moving on to paying off your debts. For this he advises that you pay the smallest debt first, then move on to the next smallest, and so on – the so-called Debt Snowball method of getting out of debt.

Once you’re out of debt, his recommendation is that you increase the size of your emergency fund so that it covers 3 to 6 months of living expenses. From there, you can begin to accumulate serious savings, to pay off your mortgage, save for college, and invest for retirement.

2Your Money Or Your Life: 9 Steps to Transforming Your Relationship with Money and Achieving Financial Independence 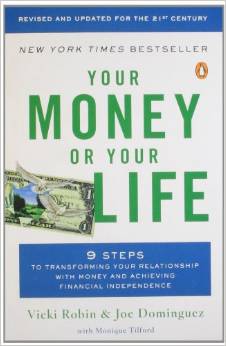 Your Money Or Your Life is written by Vicki Robin, Joe Dominguez, and Monique Tilford. Originally written in 1993, the book is been revised for the 21st Century.

The book shows you how to get control over your money and to begin creating a worthwhile life, rather than simply making a living and paying your bills. It takes a whole subject of money at the big picture, and beyond money itself.

For example, the book offers advice in the following areas:

It’s a bit of an unconventional look at personal finance, but sometimes that’s just what we all need.

3The Intelligent Investor: The Definitive Book on Value Investing The Intelligent Investor: The Definitive Book on Value Investing was written by Ben Graham and Jason Zweig, or more precisely, an update of the book originally written by Ben Graham. If you aren’t familiar with Ben Graham, he was a mentor to none other than Warren Buffet, which should rate this book a position on any list of financial publications. Graham is also credited as being the father of value investing, which is the standard investment operating procedure by Buffet – buy companies when their market value is low (but their fundamental value is high), then ride the elevator up with them.

The book is practically required reading if you’re interested in investing in individual stocks. It was originally written in the 1930s by Graham, but it was updated by Zweig and Buffett in 2003 and 2009. And naturally, the more recent editions include up-to-date techniques on stock market investing.

4The Millionaire Next Door: The Surprising Secrets of America’s Wealthy Written in 1996 by Thomas J. Stanley and William D. Danko, The Millionaire Next Door unravels the myths that surround America’s millionaires, and how they came to reach their financial status.

While most people believe that the majority millionaires inherit their money, or are financial geniuses and investment wizards, and live opulent lifestyles, the authors’ research shows otherwise. As it turns out, most millionaires live much closer to the ground than the average person thinks. In the book, they produce a detailed profile of who the typical millionaire is, and what their life looks like.

The results are astounding. It turns out that people who live lives of the textbook millionaire – based on high-level of consumption – are not millionaires. Most spend their money at least as fast as they earn it.

The real millionaires turn out to be far more frugal. Their research indicates the following:

Perhaps the most eye-opening revelation of the book is that there is no secret to becoming a millionaire. They are for the most part ordinary people, who hold ordinary jobs and run ordinary businesses, but with an incredible propensity for self-denial and to save and invest for the future.

Even if you don’t aspire to become a millionaire yourself, the book is an excellent read if you simply want to improve your financial situation.

5Debt-Free U: How I Paid for an Outstanding College Education Without Loans, Scholarships, or Mooching off My Parents Debt-Free U may not be the biggest blockbuster on the book market, but it’s incredibly timely given the explosion in student loan debt, and the crisis that’s building behind it. It’s a classic strategy on how to avoid becoming yet another student loan victim.

Author Zac Bissonette attended the University of Massachusetts, and managed to get an education at a top public university without using student loan debt to make it happen. He didn’t even use his parents’ money.

Bissonette challenges the conventional assumption that people need to pay top dollar to get a college education. But even more specifically, he refutes the idea that you need to use student loan debt to pay for it.

Bissonette disputes the default assumption that student loans are a necessary evil. In fact, he claims that avoiding them is an absolute necessity, even if you don’t have the benefit of scholarships. He even goes so far as to assert that popular college rankings are mostly marketing hype, that will trap you into paying more for an education then you should. He even challenges the notion that a degree from an elite program is a requirement, either to enter graduate school or to get a job at some of the country’s top employers.

This book is a must-read if you are about to attend college, or if you have children that are about to do so. Read this book before you make costly mistakes – the kind that can affect the rest of yours or your child’s life.

Those are my 5 – what books would you have included? Leave a comment!