Giving doesn’t always involve opening your wallet. Some of these unforgettable givers did indeed make amazing financial contributions to God’s Kingdom work, but others are amazing because they gave in other ways. Whatever the type of giving, I offer a “gentle challenge” for each, in hopes that you – like me – will become a better giver. 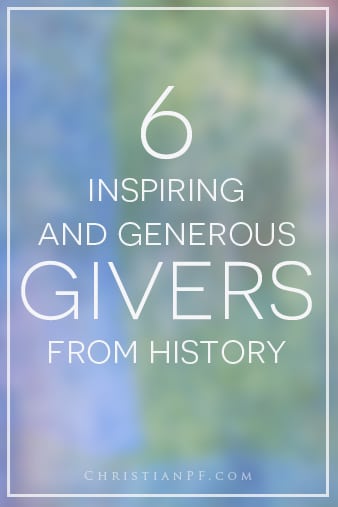 LeTourneau (1888 – 1969) was a Christian industrialist who dedicated his life to being a businessman for God. He was hugely successful, designing and developing his own line of earth-moving equipment. LeTourneau was the maker of nearly 300 inventions, and had hundreds of patents in his lifetime. As he succeeded financially, he increased his giving to the point where he was giving 90% of his income to the Lord’s work. LeTourneau once quipped, “I shovel out the money, and God shovels it back – but God has a bigger shovel.”

You may be thinking, “I could give 90% too if I was a multi-millionaire.” Maybe so, but LeTourneau didn’t start out wealthy.

A gentle challenge: Whatever percentage of your income you are currently giving, make a lifelong plan to bump that percentage with every opportunity.

Wesley was a man who was greatly impacted by an event which occurred while he was a student at Oxford. After purchasing some pictures for his room, he noticed one cold winter day that one of the chambermaids had nothing to protect her except a thin linen gown. When he reached into his pocket to give her some money to buy a coat, he found he had too little left. Immediately, the thought struck him that the Lord was not pleased with the way he had spent his money. He asked himself, “Will thy Master say, ‘Well done, good and faithful steward?’ Thou hast adorned thy walls with the money which might have screened this poor creature from the cold! O justice! O mercy! Are not these pictures the blood of this poor maid?”

From that day, in 1731, Wesley determined to maintain his standard of living at the same level and give away everything above that threshold. At that time, with earnings of 30 pounds and living expenses at 28 pounds, he gave away two pounds. When his earnings increased to 60 pounds, he gave away 32. As they increased to 120 pounds, he continued to live on 28 and give away 92 pounds. Wesley became known for his saying: “What should rise is not the Christian’s standard of living, but his standard of giving.”

He continued this practice his entire life. Even when his income reached 1,400 pounds, he lived on 30 pounds and gave the rest away. Because Wesley had a fear of laying up treasures on earth, the money went out in charity as quickly as it came in. He reports that he never had 100 pounds at any one time.

A gentle challenge: Whatever your current standard of living, consider capping it and giving every penny above that cap to God’s work. You may never give the percentage Wesley gave, but wouldn’t it be great to watch your giving grow to 20%, 30% or even 50%?

3. The Priest of Auschwitz

During the Second World War, Polish Priest Maximilian Kolbe was arrested by the German Gestapo for hiding Jews and Polish refugees from the Nazis. When three prisoners disappeared from the Auschwitz prison camp, the deputy camp commander issued orders to pick 10 men to be starved to death in order to deter further escape attempts. One of these ten, Franciszek Gajowniczek, began to cry out, “My wife! My children! I will never see them again!”

At this point, Kolbe stepped forward, removed his cap, and said, “I am a Catholic Priest. Let me take his place. I am old. He has a wife and children.” Amazingly, the commander allowed the request.

In the starvation cell, he celebrated Mass each day and sang hymns with his fellow prisoners. After two weeks of dehydration and starvation, only Kolbe remained alive. Because the cell was needed for other prisoners, he was given a lethal injection. Those present say he raised his left arm and calmly waited to die.

A gentle challenge: Keep your mind open about how you may serve others. Avoid self-imposed limitations . . . God may have something bigger in store for you.

Bonhoeffer (1906-1945), a German Lutheran pastor, writer and anti-Nazi dissident, was well aware that his opposition to Hitler would endanger his life. As Hitler rose in power, Bonhoeffer’s friends found him sanctuary in the United States, teaching at the Union Theological Seminary in New York. He left Germany for the United States in June, 1939, only to encounter much inner turmoil once he arrived.

He wrote to Reinhold Niebuhr: “I have come to the conclusion that I made a mistake in coming to America. I must live through this difficult period in our national history with the people of Germany. I will have no right to participate in the reconstruction of Christian life in Germany after the war if I do not share the trials of this time with my people . . . Christians in Germany will have to face the terrible alternative of either willing the defeat of their nation in order that Christian civilization may survive or willing the victory of their nation and thereby destroying civilization. I know which of these alternatives I must choose but I cannot make that choice from security.” Bonhoeffer returned to Germany on the last scheduled steamer to cross the Atlantic.

Bonhoeffer was arrested in April 1943, imprisoned at a Nazi concentration camp for nearly two years, and executed by hanging on April 9, 1945, just two weeks before Allied forces liberated the camp and three weeks before Hitler’s suicide.

This was a man who was pressured by his friends to steer clear of the dangers in Germany, and could easily have justified staying in the United States. After all, he was teaching at a theological seminary. But Bonhoeffer was a man of principle and conscience who returned to his homeland fully knowing that he was laying his life on the line.

A gently challenge: Pay attention to that small inner voice. Sometimes God’s plans may not appear to make sense, but when we allow God to control our consciences, we will discover ourselves giving more of ourselves than we ever dreamed possible.

5. The Woman Who Gave Her Last Few Coins

Sometimes the sacrifice speaks more loudly than the size of the gift, as in this story:

Jesus sat down opposite the place where the offerings were put and watched the crowd putting their money into the temple treasury. Many rich people threw in large amounts. But a poor widow came and put in two very small copper coins, worth only a few cents.

Calling his disciples to him, Jesus said, “Truly I tell you, this poor widow has put more into the treasury than all the others. They all gave out of their wealth; but she, out of her poverty, put in everything—all she had to live on.” – Mark 12:41-45 NIV

A gentle challenge: Consider increasing your giving (whether money, time or talents) beyond mere convenience and into the realm of sacrifice. The Bible has many verses on giving, and it’s clear we are to sacrifice for others.

6. The Father Who Gave His Most Precious Possession

There once was a father who loved his children, but they didn’t love him. One after another they left their father’s house, vowing never to return. Finally, the father had a son who reciprocated that love. This son honored and respected and obeyed his father. The father was thrilled, but he still mourned over his other children who had rejected him. He then had a plan – a risky plan. “I will give up my beloved son to make room in my house for my wayward children to return. Hopefully, they will realize my love for them and come back home.”

You may recognize this vignette as the story told in John 3:16 (NIV): “For God so loved the world that he gave his one and only Son, that whoever believes in him shall not perish but have eternal life.” No list of amazing giving stories could be complete without including this one. I hope you agree.

A gentle challenge: Commit your family to the Lord – no strings attached.

Jesus said, “It is more blessed to give than to receive.” (Acts 20:35 NIV) Candidly, I am not sure of the exact types of blessings Jesus is talking about, but I know this: we can’t go wrong by becoming better givers.

This is what I wish for each of you.

Are you more of a monetary giver, or more of an action giver? How can you do better? Which of these amazing givers inspire you the most? What are some ways you can give? Leave a comment!