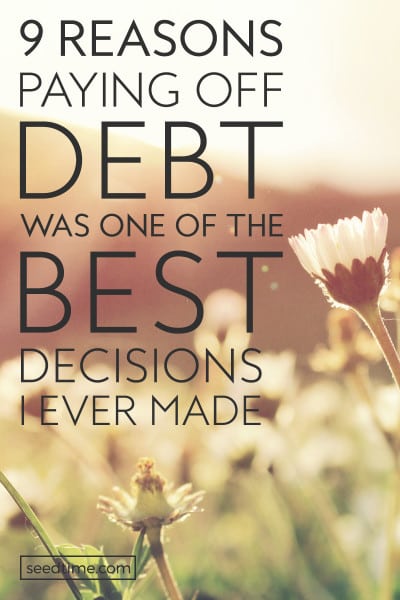 It has now been a few years since my wife and I paid off all of our non-mortgage debt, but the benefits still remain.

It is absolutely one of the best decisions I ever made and I can’t help but wish that everyone I know could experience some of the joys of having all of your debt paid off, especially your mortgage.

In this article, I just want to take a couple minutes and go over a few of my favorite things about having my debt paid off.

I think hands down the best thing for me about it has been being able to not feel the pressure that I felt from having debt. I know not everyone feels this pressure but for some reason it was one that I always carried around and it felt like I had a monkey on my back that I couldn’t shake off.

It felt like someone was standing on my chest when I laid down at night.

Just being able to eliminate that pressure and the resulting peace that came from not having to owe money to anyone has been amazing.

This one was an unexpected benefit for me even though I knew that many marriages come to an end because of fights about money.

I didn’t realize how many of our fights were actually money related until we got out of debt.  It was only then that I could see clearly that so many of them were fueled by pressure created by tight financial circumstances.

Since I no longer have to pay hundreds or thousands of dollars in payments to credit card companies, car loan companies, and everything else,  I’m now able to move much quicker towards my financial goals.

Saving up for our kids college or saving for retirement or even saving for a vacation is a whole lot easier and quicker than it ever has been before.

4The feeling of owning something outright is just plain awesome

Because I was used to borrowing to get everything in my life, I didn’t really know what it actually felt like to own a lot of things without someone having a claim on it.

I still remember the day that my wife and I went into Fifth Third Bank and paid off our first car. I’ll never forget the day we got the title in the mail and the feeling of knowing that we own this car and the bank doesn’t have any claim on it.

It’s hard to describe if you haven’t felt it before and if you came out of the same type of spending and borrowing habits that I had. It is still, to this day, an incredibly memorable moment in my life where I had that first taste of owning something outright instead of having the bank with their hands all over it.

5 I’m able to give more generously

This has been something that Linda and I have been dreaming about for years. I still remember when we were going through this challenging process of paying off our debt and really cutting way back and living on way less than we were earning and all those sacrifices that we were making.

The thing that kept us motivated was knowing two things:

This may be the most fun and exciting part of having our debt paid off. It’s just having the opportunity, having the resources, to take action when I see a particular need, rather than saying, “I wish I could help’ but I can’t afford it.”

It also has allowed us to support various ministries and charities that we are proud to be able to give financially to. When we were in debt, we just didn’t have any money or any means to support them financially.

I still remember living paycheck-to-paycheck. Knowing that any little thing that could pop up – even as simple as a flat tire – could completely derail my financial life and could set off a chain of events that could lead me to financial collapse.

The main reason was that there was absolutely no margin for error – everything was right on the absolute line or already over the line. If my car broke down and I had to miss a day at work, then I wouldn’t get paid and then we wouldn’t be able to afford groceries and whatever else.

Once the debt was paid off or even once we started in that direction, there was enough margin that we could have minor emergencies popup and we could handle them without any major setbacks.

7 It shifted my momentum forward instead of going backwards

I noticed that as I was living paycheck-to-paycheck, I found myself just slowly slipping and spiraling downward financially. One late payment would add on top of another and all the interest payments they were making to the debt were making things tighter and just forcing me to go backwards instead of moving forward.

Once I began paying off my debt and making forward progress, then all of sudden I’d notice the opposite in fact. It was like a snowball rolling down a hill and I would pay off one debt and I’d have more money to pay off the next debt.

Then, after I got all my debt paid off, I was able to focus on saving for retirement or saving for a vacation and doing it much quicker than I was before. The feeling of that momentum behind me, moving me forward is really fun and really exciting.

8 I was no longer a slave to my boss

This one sounds funny but I used to feel like my boss owned me – in that I was a slave to my job. The main reason I felt this way is because I was completely dependent on him, or so I felt, for my survival.

With no margin for error, with no buffer or anything else, I felt I was trapped and that I was the furthest thing from being able to have my Jerry Maguire moment where I could just walk out at any given point.

Now, I’ve written a bit about what to do when you hate your job and how you should handle it and I don’t think storming out is the best approach at all. But it is nice when you know that you can survive for a month or more without your boss.

I was dependent on the income from my job and that was all I could see. After paying off my debt and beginning to build up a little bit of savings, I immediately saw the benefit and I finally began to feel less like a slave to my boss and my job. I still needed my job, but I just felt a little more in control.

9 I wanted to set a good example for my kids

At the time when we paid off our debt, we didn’t have any children yet but I knew they were coming. Now we have our first son and I’m getting a little bit of a glimpse into what it means to set a good example for him.

Anyway, these are just a few of the reasons that paying off my debt was one of the best things I’ve done.

I would love to hear from you in the comments about why it’s been great for you or why you think it would be awesome!