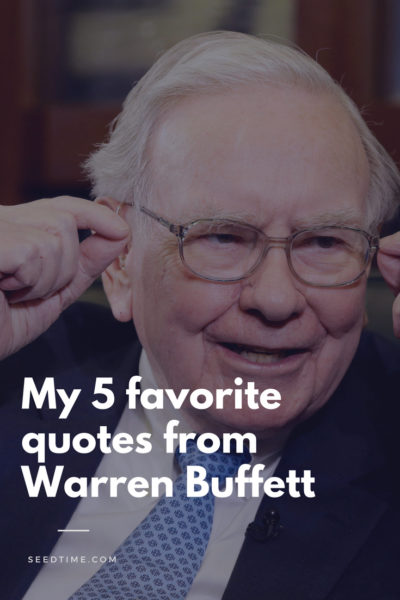 I am a big fan of Warren Buffett and he is on a prayer list of guys who I want to see in heaven. And even though we don’t see eye-to-eye on everything, there are lots of areas that he operates using Biblical principles.

No one can escape the laws of gravity, and you can try to fight against it or you can use it to your advantage. I find that Biblical principles are no different.  You don’t have to be a Christian, or even aware of their source, to benefit from them.

The five Warren Buffett quotes below are not necessarily Biblical principles, but examples of wisdom none-the-less. So with all that out the way, these are my five favorites…

Isn’t there more to life than money? I have met people who I wouldn’t work with for a million dollars, haven’t you? People are people and you will never be completely insulated from people who bug you, but if you are hiring them or choosing to work with them, they might as well be people you enjoy being around.

When your business partners are sharing your objectives you won’t have to waste your time pulling against each other. If you are building a business to sell eco-friendly products with the sole intention of saving the rainforest and your partner is only concerned with increasing profits, you are going to be in trouble.  Right?

2. “Leave your children enough money so they can do anything, but not enough that they don’t have to do anything.”

Someone I know received 8 million dollars as an inheritance on his 21st birthday. A few people I was talking to couldn’t believe me when I said I wouldn’t want it. To me, the joy in life is overcoming the challenges and reaching the successes. I would have felt like I was robbed of the chance to fight and earn it.

I want to be able to look back on my life and see all the obstacles that I overcame in order to reach my destination. Don’t get me wrong, everyone needs help on the way. For some people, the 8 million dollars might be just the help they need to get their non-profit off the ground or get their business started.

The irony is that as much as some people desire retirement and the “easy life”, many of them find themselves bored out of their minds. We all need something to live for. I remember how miserable I became when I was out of work for a few months. I wanted to contribute to society, but couldn’t find the opportunity. I felt like a big, lazy blob and wanted more than anything to just have an opportunity to do some work. Amazingly, as soon as I started working again, I felt a whole lot better about myself.

Suppose you only have $5 in your pocket until the end of the week, it is likely that you will make a good decision with it because it is all you have. On the other hand, if you have $100 for the week, your decisions regarding a $5 purchase are far less critical since you have another $95. Therefore, people tend not to treat those decisions with the same respect they would if it was their last $5.

Parkinson’s Law states that expenses rise to meet income. It is the reason that many people wonder why their last raise didn’t make paying the bills any easier. The way to defeat Parkinson’s Law is to treat each dollar as if it is the last – to make the best possible decision for each and every dollar.

Not as a miser, but as someone who is choosing to make wise decisions with their money.

4. “It takes 20 years to build a reputation and five minutes to ruin it. If you think about that, you’ll do things differently.”

Look at any number of the celebrities that had their reputation destroyed the last couple years. One day they can be very respected in their fields and the next they can have a whole different perception in the eyes of the public.

With technology, it is becoming more and more difficult to hide from mistakes. Society is much more transparent than it used to be. You can Google a phone number and get directions to the location, employers are checking up on Facebook and Instagram, and you can see what was on a website years ago. The days of being able to do something stupid and trying to cover it up are gone. So, Warren’s advice is more relevant now than ever.

5. “There are no called strikes in the ball game of investing.”

While I agree with what Warren is saying, I have noticed that the problem for most people is that they are afraid to swing the bat. They stand up there watching opportunity after opportunity go by only later to say, “I wish I would have…” I did it for years.

So while investing in stocks generally isn’t the best move for most beginners, thankfully we now have all kinds of simpler options of how you can get started investing even without much money with tools like Acorns, Betterment, or Fundrise.

Do you have any other Warren Buffett quotes you love?